It’s been a busy week again! Where does the time go?!

Last week Friday I took off from work early and headed north to Boone for some skiing at Seven Oaks. I haven’t skied in four or five years, so it took a little bit to get up to speed again and get rid of my fear of falling!

I have to admit that I did fall once (and it definitely hurt). When you are headed down a blue and aren’t sure which direction to go to avoid the black, sometimes you are end up in panic mode, freeze and take a bad fall. Oops! But I got back up and made it down the, ahem, hill. 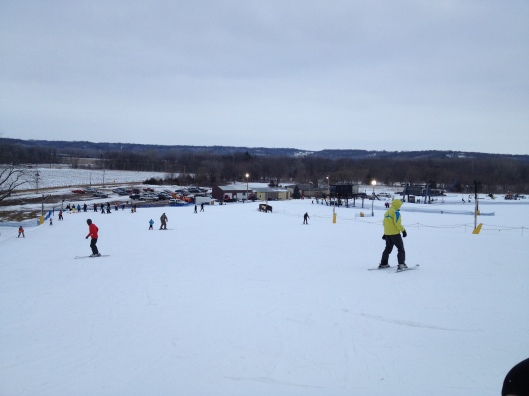 This week all of our companies had an all employee celebration hosted at Palmer’s Deli & Market on Ingersoll. We had so much fun eating, hanging out and listening to the dueling pianos. One of my favorite parts of the party was that I won four hours of PTO. Woo hoo!

On another note, I have to share my two recent FAV purchases.

I FINALLY found some dishware that I like (I’ve only been looking for almost a year), courtesy of World Market and the country of Thailand. My new kitchen dishes are literally my “present” for my birthday from last year, so I would say that I am a bit behind!

And I found these adorable bow heels at DSW last weekend. Can you say cutest thing ever?! Now if it would only quit snowing I could start wearing them! Spring, where are you?

Hope you had a great weekend!

Hello! I’m Angela and I’m a 30-something blogger who blogs about life happenings and the fun journey while keeping it real. I love traveling, family and friends and adventures. Thanks for stopping by!